Expressive Sridevi Gives Her Career Best in This Unsettling Drama

I have a confession to make. For a film critic, I tend to be partial towards revenge films. Revenge is a genre that many Bollywood filmmakers have in the recent past played with. This trend started off with Aamir Khan's Ghajini(2008). Karan Malhotra showed us in Agneepath(2012) that sometimes achieving your vengeance means you end up losing more people in the bargain. Vishal Bharadwaj showed us in the poetic Haider(2014) how one man's quest for vengeance can drive a person to madness. Sriram Raghavan's intelligent Badlapur(2015) did not just stop at demonstrating how revenge can cloud a person's judgement, but actually went a step further by exploring the moral ambiguity associated with it.

At the surface level, Mom, feels like a rehash of this year's Daredevil-inspired Kaabil. Someone close to the main character is raped, the main character seeks help from the law, as it turns out, obviously the law is blind, main character resolves to take matter in his/her own hands, and one-by-one ticks off each villain. Throw in a clueless cop who suspects the protagonist of killing the bad guys. But while Kaabil was at best, an ordinary one-dimensional film comprising of cartoonish characters you never really cared for, Mom is a deeply layered thriller that succeeds in keeping you invested right till the Se7en-inspired climax.

Sridevi is in fine form here. If she surprised you with her dignified performance as a dutiful mother in English-Vinglish(2012), then you'll be absolutely stunned with her emotionally harrowing act in this one. At first, she is just like her Shashi character from her previous film, but as her character comes to terms with a personal tragedy, Sridevi ensures that you never for once take your eyes off the screen. Any other actress(except maybe Tabu) would have played the character ten decibels higher. Not Sridevi, she plays an entire gamut of emotions with panache. At 53, she's clearly ahead of her 'Khan' contemporaries.

Equally matching her brilliance is Nawazuddin Siddiqui. As the inconsequential-looking(and initially creepy) private detective Daya Shankar Kapoor('DK' for short), Nawaz provides some much needed humor without taking away the riveting nature of the film. It's a wonder how this gem of an actor can consistently churn out memorable characters, that other actors can possibly never even think of. His quirks and one-liners delivered with deadpan witticism are a treat to watch, and make me hope for a possible spin-off film. Now wouldn't that be interesting? 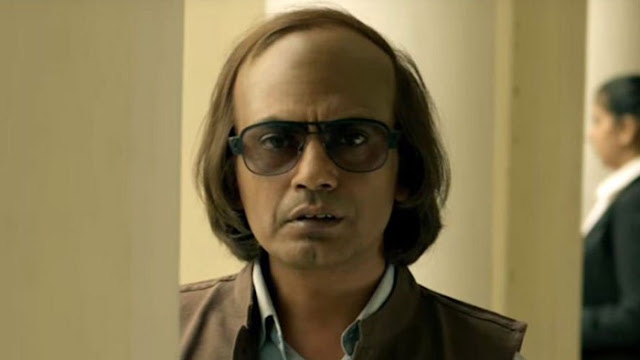 Akshaye Khanna as the no-nonsense tough cop is perfect but remains under-utilised for the most part. The guy deserves good roles, and hopefully, Mom might get him the attention he deserves.

Pakistani actors Sajal Ali and Adnan Siddiqui are good in their respective roles. At its core, Mom is about the healing of a fractured relationship between mother and daughter, and Sajal Ali is brilliant as the teenage daughter harboring a grudge against her step-mother. Scenes featuring her reserving her love only for her father makes you hate and feel sorry for her simultaneously. Abhimanyu Singh as the primary antagonist, gives a bone-chilling performance. He succeeds in making you feel repulsed.

Last week, while reviewing Cannes(2017) sensation OKJA, I mentioned how the film avoided showing the gory details, trusting its audiences to be intelligent enough to comprehend what horrors were taking place off-screen. Debutante director Ravi Udyawar makes use of the same smart trick by showing us elongated aerial shots of a car speeding through deserted roads, occasionally stopping so that the driver can swap seats with a guy sitting in the rear, thereby keeping the act of the gang-rape outside the frame, but at the same time, leaving nothing to the audiences' imagination. Ravi does a fine job here by deliberately keeping the pacing slow, so that we are given enough time to empathize with our main characters' plight.

The music by A.R. Rahman contributes to the grim atmospherics of the film, which unlike recent Bollywood thrillers, is not at all jarring, thus allowing the story to take center-stage.

Cinematographer Amay Goswamy deserves special mention for his outstanding work here, especially towards the climax of the film, which takes place in the snow-capped Kufri.

Despite its runtime of nearly two and a half hours, the film keeps you engaged throughout. Thankfully, there aren't too many songs that interrupt the narrative flow. What you get is a traditional revenge dish, served with well fleshed out characters and an emotionally satisfying tale of healing ruptured bonds. Definitely the best thriller to hit Indian screens since Badlapur.