I'd like to imagine there's a bar somewhere in a quaint town in Europe. Could be in a picturesque location such as Corsica, Prague, London, anywhere, as long as it's in Europe. Three men step into the bar and each one orders a beer. They look at each other at the counter and decide to talk to each other. The first man says - "Hi, I am Jai(You'd remember him as Saif Ali Khan from Love Aaj Kal). For years, I have pursued my dream job, but now, when I have everything I ever wanted, I realize I'm still missing something." The second man stares blankly at the momentary foam formed at the top of his bottle, and says - "Hi, I am Ved(You'd remember him as Ranbir Kapoor from Tamasha). For years, I have climbed the corporate ladder, and now I'm beginning to realize that I have been telling myself a lie for a long time, and I am actually someone else." The two men turn to the third fellow, who says - "Hi, I am Harry. I am a tourist guide who travels to different countries, but for a while now"-

I don't think I really need to continue elaborating any further on what story Harry could possibly share with the other two. However, while the three men exchange their similar soul-searching stories, I'd imagine the bartender, who just happens to be Imtiaz Ali, to be listening to their stories carefully. Somewhere in the deep crevices of Imtiaz's brain, an idea was forming. The idea to make a film, a film without a story, a film with a complex protagonist, a complex protagonist who required himself to internalize deeply and embark on a soulful journey of self-discovery. The idea was highly novel and it worked! It worked for Jab We Met, it worked for Love Aaj Kal, it worked for Rockstar, it worked for Highway, it worked for Tamasha. It worked for all these films, and it fails spectacularly for Jab Harry Met Sejal. The reason is pretty obvious and that is the lack of any novelty.

I'll be frank. I have always been partial towards Shahrukh Khan. Even when the most loyal of SRKians seemed to desert him for making cinematic nightmares such as Happy New Year and Dilwale, a film that got me wheezing from the epiglottis in an attempt to find the exit, I was still a firm believer in his acting skills, after all, he is a theatre actor like me. The solution was really simple, he just had to start picking up better scripts from better directors. And boy, he did not disappoint! Having projects helmed by the new wave of filmmakers such as Maneesh Sharma, Rahul Dholakia, Imtiaz Ali, and Anand L. Rai, would make any serious actor enviable. However, while Fan was critically acclaimed, it just did not have enough 'masala' to make it financially beneficial. Raees was the SRK film we were all waiting for, a film that gave SRK the opportunity to flex his acting chops, without compromising on his star power, and while it was a hit, it still couldn't match the collections as his other 'Khan'temporaries. All hopes were pinned on SRK's first collaboration with the modern day Yash-Raj Imtiaz Ali.
With Jab Harry Met Sejal, Shahrukh oozes freshness and sarcasm in nearly every frame he is in. It is perhaps one of the most unique romantic roles he has taken so far. Unlike his pure Raj/Rahul roles in all his previous romantic outings, SRK's Harry is a flawed guy who is far from perfect, a guy who enters into casual relationships with multiple women, only to leave them soon. This is a character that is amazingly self-aware of his own shortcomings, and Shahrukh plays him with impressive restraint and maturity. There are quite a few scenes where he internalizes his character's pain with a panache that would make Ranbir Kapoor proud. If only the story had been as novel as SRK's character.

Anushka Sharma is a major disappointment as Sejal. While her chemistry with Shahrukh produces some genuine sparks, despite her getting the Gujju diction right, she comes across as caricaturish in most of her scenes. Not only is her character underdeveloped, but poor Anushka gets precious little chance to really add anything extraordinary to the film. She is capable of so much more. 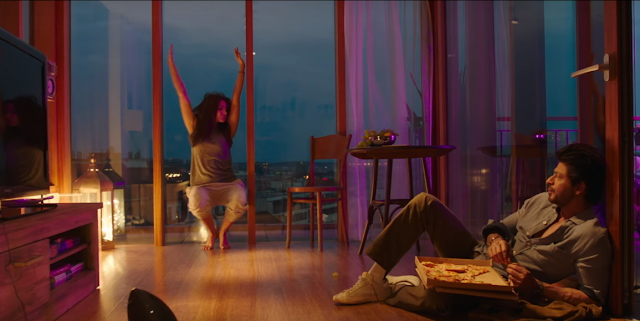 Chandan Roy Sanyal, of Kaminey fame shows up in a thankless cameo, in an entirely unnecessary sub-plot that briefly touches upon the ongoing immigrant issues persisting in Europe.

The music by Pritam is foot tapping, but you occasionally miss A.R. Rahman's soulful score. The film has a wafer-thin plot that in hindsight feels really stupid and forced. I fail to understand why on Earth would a pair of strangers agree to travel countless countries to find a lost ring! But then again, in most cases, watching a Bollywood film requires some suspension of disbelief. Miss Lovely cinematographer K.U. Mohanan does some decent work here, but unlike the vintage wine treatment imparted by Ravi Varman's cinematography to Imtiaz's previous work Tamasha, it fails to mask the many flaws in the story.

The problem with Jab Harry Met Sejal is not that it is the 'same old wine served in a new bottle' type of film. If it were released before Tamasha, I would still rate the latter as a far better film. Jab Harry Met Sejal could easily have held its own charm in Imtiaz's filmography, irrespective of how similar its primary character is as compared to Imtiaz's other protagonists. However, at 2.5 hours long, the editing is sloppy, and the screenplay, while innovative at first, gets repetitive. The jokes run out post interval, making way for lengthy conversations that stray into Jab Tak Hai Jaan(yawn!) territory.

As a lover of Imtiaz Ali films, I was left underwhelmed. As an SRK fan, all my hopes are pinned now on his film with Tanu Weds Manu  director Anand L. Rai's next film.

* Does every major character in a film about a lost soul have to be a singer/aspiring singer? Starting to seem like a silly excuse for getting the characters to break into a song-dance routine.