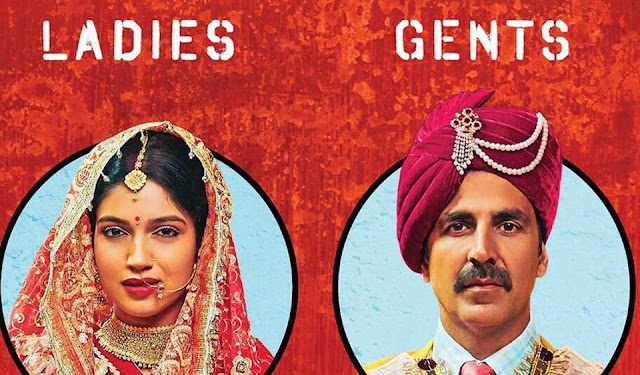 "Bless this room, Oh Lord we pray
Make it sweet by night and day
Bless the seat and bless the flush
Bless the early morning rush"

Watching Toilet: Ek Prem Katha reminded me of the four years I had to endure, passing daily through a dirt road to reach my engineering college. The road would be occupied by kids, happily performing their daily ritual of openly defecating on the road, blissfully unaware of the distress being caused to the rest of us more privileged folks, who'd grown up having the comfort of western style seats, the typical cornerstone of any urban household, where most of us spend our time contemplating life, and many a simpleton, turns into an esteemed philosopher in their own eyes. At first, freshers like me were scandalized as the earthly smells tickled our noses, but over a period of time, we learnt to how to adapt, we learnt how to block our olfactory receptors to the fresh calls of nature, and God forbid, if the smell was too strong, we simply learnt how to hold our breath for five whole minutes! In other words, we were adjusting, just like the 'lota party' shown in the film.

A few weeks ago, while reviewing Alankrita Srivastava's rebellious Lipstick Under My Burkha, I wrote at length about the perils of film propaganda encouraged by certain authoritarian elements. Barely a week later, quite a few 'nationalist' people chided me for not reviewing Madhur Bhandarkar's political thriller Indu Sarkar, since I felt that more than being a film meant to unearth the dirt on a seemingly shiny surface called The Emergency, the trailer implied that this was at best, a film that indulges in some reductionist characterization, that seeks to vilify the political saga of Indira Gandhi. What could have instead been a first of its kind, 'House of Cards' - style complex character study of a former Prime Minister, one that could showcase the good, the bad and the ugly, Madhur's film looked disappointingly like a mawkish attempt to cash in on the nationalist wave of the current times.

Toilet: Ek Prem Katha is no less a propaganda film, and a pretty good one at that. Yes, there are instances where The Government is praised in the film for its campaign of Swachh Bharat Abhiyan(Clean India Mission). Yes, there are dialogues in the film that justify The Government's decision of demonetisation. Yes, the film can get preachy at times with its progressive social message. Yes, the film has the typical superstitious villagers, lazy administration and of course, the corrupt  politicians. But most important of all, it entertains! 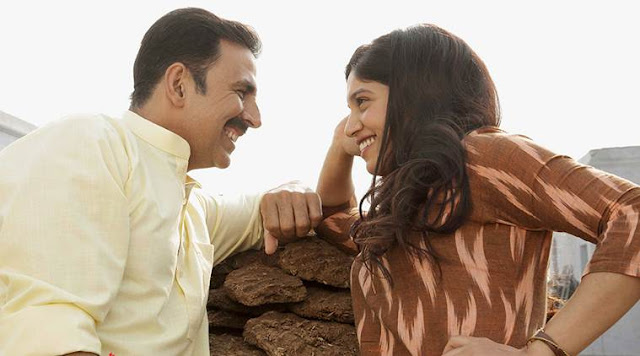 Goliyon Ki Raasleela Ram-Leela writers Siddharth Singh and Garima Wahal do some fine work here in keeping the dialogues rooted and cleverly balancing the humor and romance. In her first film post the genuinely sweet Dum Laga Ke Haisha(2015), Bhumi Pednekar(a good 15 pounds less) shines out as the educated Jaya, who takes a firm stand by fleeing her husband's home for being 'toilet-less'. Akshay Kumar gives an equally convincing performance as the uneducated husband Keshav. After back to back hits, the man doesn't seem to slow down! Pyar Ka Punchnama actor Divyendu Sharma's quirky act is excellent, and provides some of the most laughs in the film. Sudhir Pandey as Keshav's father is good, though he plays his character ten decibels above normal.

Toilet: Ek Prem Katha has some major issues though. For a film that aims to be so progressive, it contains a hell of a lot of cringe-worthy scenes. I wonder when indeed would Bollywood get over its fascination of having its heroes stalking the girl, in the hopes that she'd ultimately fall for his charms. Yet again, we get to see the girl eventually smiling at the stalker's seemingly innocent advances. And the biggest irony of all is that the film happens to release at the same time when its leading man appears on a news channel and talks about how girls must learn self-defence to safeguard themselves from the very men who may get influenced by watching his film.

Thankfully, Akshay Kumar and Bhumi Pednekar's easy chemistry just about convinces us to root for their romance. Some of the film's best moments lies in their quieter, tender moments.

It's far from a perfect film, but it succeeds in what it sets out to do. Hopefully, it will make a genuine change. A visit to this toilet won't be such a bad idea!

* Okay, I'm anticipating some backlash for my comments on nationalist propaganda and  my refusal to accept a film that throws a bad light on a former Prime Minister. No hidden agendas here, no political preferences, I'm simply just a cinephile lover, who loves to dissect films. So I guess I'm entitled to an opinion, as are you, so if you feel that you can abuse me, or call me anti-national, or stop me in any way, like some have tried in the past few weeks, you can save your breath.

*  Never again will Mr. Nihalani understimate the Indian audience intellect, never again will he enforce his brand of moral policing, never again will progressive filmmakers have to be scared of our favorite dinosaur uncle ever again, rest assured, Pahlaj Nihalani shall NOT be missed!
And now his watch has ended.

*We wholeheartedly welcome the news of Mr. Prasoon Joshi taking over as chairman of the CBFC. We sincerely hope he doesn't take a leaf out of Nihalani's book ever.