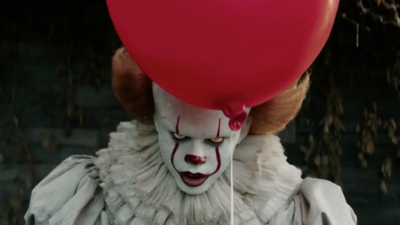 The greatest mistakes that horror films make nowadays is to just simply try to immerse the viewers in the gothic-like atmospherics before bombarding them with creaky doors shutting, characters staring into the mirror, only to suddenly spot some vengeful spirit smiling right back at them, eardrum shattering background music, screaming banshees, and so on, without really allowing us to invest in the characters caught in the proceedings. As humans, we have been tailor-made to always root for heroes, and in the case of horror stories, what we really want is to root for someone not dying.

Based on the Steven King's 1986 novel by the same name, director Andy Muschietti does an incredible job of honoring the spirit of the original novel, and at the same time, modernizing the horror by setting it in the 80's, instead of the 50's, like in the source material. The film's focus on themes such as loss of innocence and coming of age ensures that there is plenty of drama unfolding before the really scary stuff begins. It(Pun Alert!) cannot be described as just a horror film, but is also a story of love and friendship, that really makes us root for the terrorized children.

The film wastes no time in introducing us to all the children. Their leader is 'Stuttering Bill', played by Jaeden Lieberher, who feels like a ghost in his own home, as his parents withdraw all their love towards him, due to one terrifying incident. There is the obese Ben(Jeremy Ray Taylor), whose underlying facets define him far more than his weight. Beverly Marsh(Sophia Lillis), the only female member of the Losers' Club, who deals with sexual abuse at the hands of her own father. We're also introduced to Stan Uris(Wyatt Oleff), a Jewish germaphobe, Mike Hanlon(Chosen Jacobs), an African American orphan, whose parents died in a freaky fire incident, Eddie(Jack Dylan Grazer), a sickly boy who only feels at home in the company of his friends, and 'Trashmouth Trozier'(Finn Wolfhard), aptly named due to his foul language and loud mouth.

These are children who're facing the first waves of teensy pangs that one were to associate with the onslaught of puberty. Their conversations usually revolve around Yo-Mama jokes and the size of each others' peckers. Much of all this feels so authentic, and you've got to hand it to the child actors for sharing a great dynamic with each other. Creating really great chemistry can always be challenging with a movie like It, because you're casting kids who don't have a ton of experience, but thankfully, what we end up seeing is something very natural, and this helps the film in striking the same sort of emotional resonance that the book does.

Bill Skarsgard as Pennywise - The Dancing Clown, an ancient trans-dimensional evil that awakens itself every 27 years, is so good that the mere anticipation of him is almost scarier than when he actually appears on-screen. While nothing can be compared to Tim Curry's version of Pennywise in the 1990 television miniseries adaptation, Bill's version feels very fresh and he uses his almost 7 feet wiry frame to his advantage in crafting a truly frightening clown, that transforms itself to the kids' worst manifestation of fear.

Intended to be the first installment in a planned duology, Andy's adaptation of It transports us back to an idyllic world filled with summers riding bicycles, walks by the lake, charming homes with green lawn, and warm people. He takes us to a journey into Pennywise's world through a disturbing, surrealistic and intoxicating experience that will leave nobody at ease.

I for one, cannot wait for It: Chapter 2 to hit theaters in probably early 2019.