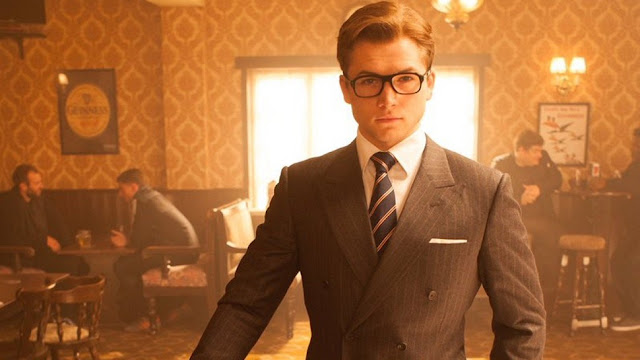 A Kingsman Movie Should Have Been More Dapper!

"I always felt the old Bond films were only as good as the villain" - Colin Firth[Kingsman: The Secret Service(2014)]

It seems highly ironic that the sequel to the film in which these lines are delivered contains such a disappointing villain. While the first film benefited enormously due to the presence of its colorful & blood-phobic megalomaniac in the form of the ever-psychotic Samuel L. Jackson, the second film in the franchise can rightfully be judged as 'superficial', if one were to simply look at Julianne Moore's villainous turn. So while she is given enough of stuff to do in the film that just about qualifies her as diabolical, and that includes tossing people she doesn't like into mincers and serving them as burgers(gross!), her annoyingly little-miss-sunshine act pales in comparison to her predecessor.

The most challenging aspect that makers face when making a sequel to a well received film nowadays is to expand on the universe created by the first film, without sacrificing on its integrity. So while The Golden Circle introduces us to a plethora of new & interesting characters, doubles down on the video game like action, you miss the gleeful abandon with which the original slam-bang action movie about ludicrously British agents was served to audiences, deliriously shaken, not stirred. What you get instead is a convoluted plot involving tedious sub-plots, a rehash of some of the best scenes from the first film(Manners maketh man!), previously deceased characters getting resurrected back to life, all for the sake of fan-service! An increasingly annoying trait of several franchise films(Pirates of The Caribbean) is to bring back iconic characters back from the dead, that not only do a great disservice to the previous films, but also display the lack of inventiveness on the part of the writers.

Still, despite the lack of novelty, there is much to appreciate here, as the film provides what it intended to serve - entertainment! The only problem with the film is that is feels too stuffed and overlong. There are just too many unnecessary characters. So while you have Taron Egerton(just fine), Colin Firth(funny) and Mark Strong(excellent) reprising their original roles, the film feels overly bloated at times, as if it has digested too many heavyweight stars such as Channing Tatum, Pedro Pascal and Halle Berry, who really don't have all that much to do. You do get the feeling that somewhere along the way, the film lost its way in trying to tell a coherent story, instead serving as a pedestal for an ensemble star cast. It's only Elton John in a hilarious and self parodying extended cameo as himself, who really shines out among the star cast.

Thankfully, the action sequences retain some of the inventiveness of the first film and are possibly one of the few reasons the film is worth watching. However, at 141minutes long, director Matthew Vaughn is guilty of the most common sin when it comes to filmmaking.