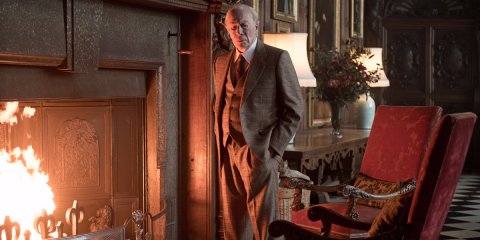 Hell Hath No Fury Like A Grumpy Grandpa Scorned!

In no time at all, All The Money in The World has become known as the film Kevin Spacey was in, and then wasn't in. Spacey had finished shooting his role as Jean Paul Getty, the famous oil baron who also was at one point of time, the richest man to have ever walked on Earth. The fact that Spacey was to play him sure got me excited, because let's face it, much like his real-life persona, the man is a natural at playing ruthless men in power. But that was before his name got rightly dragged in the mud after he was accused of multiple cases of sexual harassment. The fact that Academy Award nominated director Ridley Scott opted to reshoot all his scenes with another actor and spend an additional $10 million, with mere weeks to go for the film's release, must be appreciated. The credit must not just go to the director, but also to the entire cast, comprising of A-list actors such as Michelle Williams and Mark Wahlberg(who redid all their scenes for free), and having the film ready as per the original schedule. It is a testament to the amazing work ethic of the octogenarian whose filmography contains a vast volume of highly celebrated works including Blade Runner(1983), Gladiator(2000), American Gangster(2007) and The Martian(2015).

"That's all he ever wanted out of life...was love. That's the tragedy of Charles Foster Kane. You see, he just didn't have any to give." - Joseph Cotten[Citizen Kane(1941)]

Without a doubt, the most striking cinematic influence that I could find while watching All The Money in The World was Orson Welles' 1941 celluloid equivalent of The Mona Lisa - Citizen Kane. For those of you who haven't yet watched what I consider to be the second greatest film of all time, skip reading till the next paragraph. Those who have seen it would recall how the movie begins with it's protagonist Kane uttering the famous word - "Rosebud!" right before his death. The entire film revolves around the mystery of his last word and what it meant to its central character. It is only in the final series of shots leading to the closeup of the word "Rosebud" on a sled that has been tossed in a furnace, among many of Kane's more priceless possessions. We remember that this was Kane's childhood sled, taken from him as he was torn from his family and sent east to a boarding school.

By the end of the film, it was clear to many that Rosebud represented the very emblem of security, hope and innocence of childhood, which a man can spend his whole life to regain. Rosebud was a physical manifestation of the very thing that could still be unattainable to a man who had all the money in the world. Rosebud has reappeared many times in cinema in different forms. It appeared as the bone tossed into the air in Stanley Kubrick's 2001:A Space Odyssey. It appeared as the green light at the end of Gatsby's pier in The Great Gatsby. What then was Mr. Getty's Rosebud? What drove him to gather all the money in the world? Was it something pure like love? Was it his staggering ego that could only be matched by his money? Or was it simply money itself? I'll leave that to you to watch and decide for yourself.

Having said that, one could easily take the above dialogue spoken in context about Kane's character and rephrase it to suit Mr. Getty's character in the following manner :

"That's all he ever wanted out of life...was money. That's the tragedy of Jean Paul Getty. You see, he just didn't have any to give."

He is humanized by Christopher Plummer to ruthless perfection and cold efficiency, but injects just enough warmth and subtlety, and while I personally will always miss whatever colorful malice that Kevin could have lent to the role, Plummer's version feels far more realistic at the end of the day. Michelle Williams does some of her best work here as the desperate mother who goes up against an empire to secure the safety of her son. Now while these two are left with most of the heavy work, the rest of the cast is equally competent, especially Romain Duris, as one of the captors.

Ridley Scott's keen eye for detail never gets in the way of his storytelling, which presents us with an engaging thriller that also serves as an interesting character study of a real life Ebenezer Scrooge(interesting to note that Christopher Plummer played him in The Man Who Invented Christmas). And speaking of details, I personally loved his choice of music which consisted of some of my personal favorite songs of that period such as The Time of The Season(1968) and a special Italian version of It's A Man's Man's Man's World(1966).

My only problem was even though I was totally invested in every single character right till the end, the film felt a bit too mechanical for me, and for this reason, I'm going with 3.5/5.


* It was nice to see the cobbled Sicilian streets and its music again in a film. Felt like watching The Godfather after viewing this one.