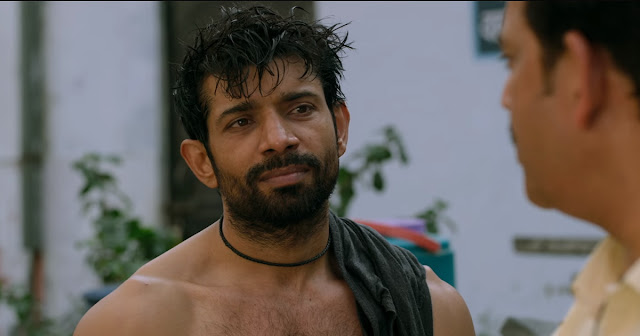 Witness The Rebirth of The Underdog Filmmaker!

Having watched the 1948 Italian film Bicycle Thieves, a cinephile decided to head to Bombay to become a filmmaker. He came from nothing. He tried, he failed. He tried again and failed again. One thing remained consistent. The man was determined to tell stories that would jolt the mainstream loving audiences out of their reverie. Bollywood film purists who were themselves content with making candy floss films featuring the hero wooing some mannequin bimbo, dismissed him as a low budget indie film director. Finally, he made a film. It was banned, and never saw the light of the silver screen. He worked harder and made more films. Sometimes, his films struggled to release due to the conservatives at the Censor Board. Sometimes, his films would halt due to budget issues. Each setback was like a powerful hook shot that should have otherwise ended the cinephile's dreams. However, just like a boxer trains harder each time he gets knocked out of the ring, each setback empowered the cinephile a bit more, and he kept perfecting his craft.

Finally, a day came when the cinephile made a film, which like an uppercut, set the very same discerning traditionalists who dismissed his brand of cinema, off-balance. That film was the phenomenal Dev. D(2009). Gradually, the cinephile managed to carve a niche for himself with each new film until in 2012, he came out with Gangs of Wasseypur, which soon became the face of the new wave of Indian cinema that shattered all the cliches and conventional formulas, in the trappings of a brutal entertainer. Thanks to him, indie became the new mainstream, and it was safe to say, that finally, Bollywood had a new force to reckon with in the form of Anurag Kashyap!

Soon, the director decided to embark on his dream project - Bombay Velvet(2015). What can indeed go wrong when you have Anurag Kashyap, the darling of the critics teaming up with the most talented star Ranbir Kapoor, to make a neo noir, Brian de Palma-style gangster flick? For a director who made a massive film like Gangs of Wasseypur on a shoe-string budget, the 120 crore budget Bombay Velvet should have been a cakewalk. Little did he know at the time that he was to receive his biggest punch to the gut yet. Having caught himself in the whole web of a big budget and big studio expectations, the director learnt his biggest lesson that the minute money becomes bigger than your story, you begin to compromise and that takes away all the honesty you put into your film. And while his vision was appreciated, it indeed appeared that Mr. Kashyap had been sucked into the very system he had revolted so hard against.

Mukkabaaz is a testament to Mr. Kashyap's unflinching fighting spirit, and could very well be his autobiography. It's no surprise then that the protagonist, like Mr. Kashyap, is a flawed underdog who has to manipulate his way to achieve his dreams, and along the way, allow the self-serving bureaucratic system to break him again and again. The biggest strength of what is perhaps the best sports film to ever come out of Bollywood is that while at the surface, it may seem like a nod to Martin Scorsese's Raging Bull(1980), this is not the kind of sports film that glorifies a sport because that's not the reality. Glorification of a sport(that is not cricket) can be done in a Chak de India(2007),  a Sultan(2016) or a Dangal(2016), but it has absolutely no place in an Anurag Kashyap film. What you get instead is a film in which sportsmen are destroyed by the system, thanks to egoistic men in power who indulge in regressive caste-based, Hindutva politics, and feudalism. 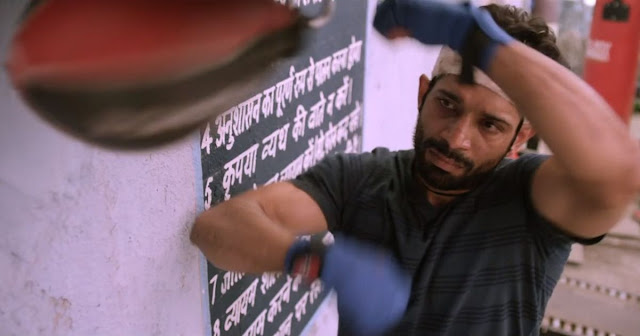 Move over Salman and Aamir Khan. It's time to shine the spotlight bright on Vineet Kumar Singh, who is best remembered for his portrayal of Danish Khan in Gangs of Wasseypur. Cast in a role that may propel Vineet Kumar Singh to stardom, much in the same way Nawazuddin Siddiqui attained after Gangs of Wasseypur, Vineet's hardcore transformation makes his 'Khan'temporaries look tame in comparison. Any average actor can gain weight/lose weight, and grow a beard, but that's not method acting. The foundation of method acting is behaving truthfully under imaginary circumstances, and Vineet, who has trained for two years to prepare for this role, gives us the real deal by unleashing his inner beast. To say that Vineet's performance can be comparable to Robert de Niro's Oscar winning one in Raging Bull would really be an understatement! It's a performance that deserves to at the very least get nominated at The Academy Awards for Best Actor in a foreign language performance. I for one, have very less expectations from our local awards, especially after Varun Dhawan being declared as Best Actor for a mediocre film like Judwaa 2.

There is something about all the female characters in Anurag Kashyap's films. Whether it is Kalki Koechlin's Chanda from Dev. D, Anushka Sharma's Rosie Noronha from Bombay Velvet(2015) or Zoya Hussain who plays Vineet's mute love interest Sunaina Mishra, the women in Anurag Kashyap's world of films come from fractured families that have their roots planted deep in patriarchy. They are no Sati Savitri, girl next doors or damsels in distress. Strong and resilient, manipulative and unapologetic to the core, they are a welcome departure from the plastic femininity portrayed onscreen by other inferior directors. The women in his films are not merely incidental tools, but are credible and also as much in the driver's seat as the male protagonist in steering the narrative past its twists and turns. Despite having no dialogues in the film, Zoya's expressions and earthy presence makes you want to root for her and Vineet's love story. Some of the best moments of the film are when she almost loses her will to live, that may even leave a lump in your throat. 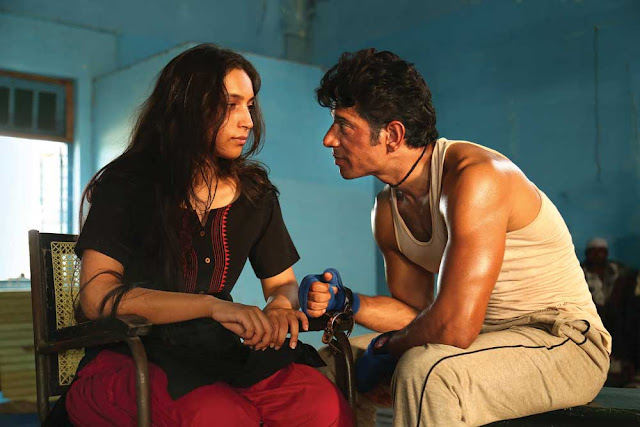 Ravi Kishan is perfectly cast as Vineet's coach, and lends his role enormous depth, despite his limited screen time. It's great to see him finally starring in a script that matches his potential. Jimmy Shergill's antagonistic turn could have been more than just a strictly one-note character, although the actor plays him with despicable menace.

Nobody captures the badlands of North India as well as Anurag Kashyap. Perhaps the biggest reason is that while films like Dangal or Sultan have polished actors like Aamir Khan trying to act like they belong to that area by simply putting on weight, growing a stubble and getting their diction right, Kashyap's films are rooted in reality simply because he casts deserving actors who hail from there, and have their roots embedded firmly in the chaotic landscape. Of course, a lot of credit for this must also go to ace cinematographer Rajeev Ravi, whose superb camera work reminded me of his own work in Dev. D.

Like his Hollywood counterpart Quentin Tarantino, Anurag Kashyap's film are also known for their brilliant soundtrack, and with this one, he simply knocks it out of the park with the help of music composer Prashant Pillai and Nucleya. My personal favorite was the wonderfully hypnotic Paintra.

I would like to believe that in another world, Bombay Velvet, which was also a love story involving a boxer, would have been a big hit. In my opinion, the movie did not deserve to be shot right in the face. Much like the way his idol Martin Scorsese told a dirty story about the history of the city he loves through Gangs of New York(2002), Bombay Velvet was Kashyap's love letter to the mean streets of Bombay, that spoke about the nihilism of a monstrous city that takes no prisoners. In this world however, it never stood a chance.

With Mukkabaaz, Anurag Kashyap erases the ghost of Bombay Velvet, redeems himself and delivers his biggest knockout punch yet, whose delirious effects I'm still reeling from. I'm going with 4.5/5.