Just what lies behind the mega-wattage glitter and opulence of a Sanjay Leela Bhansali film? A moving storyline? I don't think so, scratch the surface and you'll just find more of the same glitter and opulence that lends his films a distinctive poetic richness. Does that mean that like most big budget films that ultimately turn out to be epic misfires, his films are shallow? Certainly not. In my opinion, the only reason his films strike a resonance with the audience is simply because if there is one word that defines each film of his - it's 'passion'. Be it rage, wallowing about in self pity, or simply declaring their undying love, it is this very passion that drives his characters, irrespective of their motives.

You don't go to watch a SLB film expecting to see some realistic storytelling. What you should expect is some delightful visual pop in place of subtle narrative traction, for Mr. Bhansali weaves his movies intricately like a true artist, filling them with lavishly mounted sets, gorgeously painted backdrops, twinkling palaces and lush fabrics, in the most excessively pompous manner possible. Let's also not forget that Bollywood films are inherently pompous. One therefore, cannot accuse the man of indulging in excesses for that is perhaps the reason why his films are held in high regard. Keeping such sensibilities in mind, I decided to watch his latest magnum opus.

Having readjusted my expectations, I wasn't disappointed. Amidst the whole storm of controversy that the film was embroiled in, Padmaavat was never meant to be an accurate lesson in history. It was always supposed to serve more as a fairy tale romance of a beautiful queen & her honorable king, and another evil emperor who lusted after her. It's a classic Disney template that's been told over and over again, only this time, it includes characters who may have actually existed.

Now as the saying goes - "Every fairy tale needs a good old-fashioned villain", for villains are the ones without whom, the hero would be rendered futile. Heroes need them because destroying the villain gives them purpose. Villains are the driving force in the symbiotic relationship they share with the hero because they make the latter feel like their sins are somehow forgiven for all their benevolence. Putting things into perspective, can one actually imagine the Joker without Batman? Of course, yes. He existed long before Batman came to stop him. But can we truly appreciate Batman without the Joker? Maybe not. 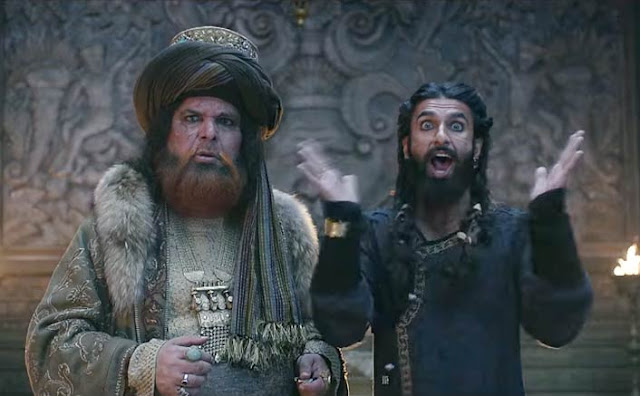 I am quite sure that the real Alauddin Khilji was certainly not as boisterous or menacing as portrayed in the film. But if Sanjay Leela Bhansali's fairy tale needed a truly hateful villain that would serve as a catalyst to display the Rajput valor, then Ranveer Singh does a commendable job in gifting Bollywood one of it's most enigmatic villains yet. In Padmaavat, he carefully crafts his own repulsive version of what was one of Indian history's most barbaric ruler and adds to his character a deliciously narcissistic touch. It's a bold move on the actor's part to go all the way into shedding away his good boy image, and play an emperor who frequently commits adultery, rapes captured princesses, murders his own family members, keeps a vast harem of sex slaves and also suggestively makes love to his trusted eunuch slave Malik Kafur, played with flourish by Jim Sarbh. Rarely does a mainstream Bollywood film go all out without any compromises. It's hard not to root for the villain in this one, especially as you see him gazing lustily into space when he first hears about Padmavati's beauty, or when he deviously manipulates a crowd into doing his bidding. Clearly, Ranveer steals the show with this one.

"You're as stubborn as your father, and as honorable...Honor got your father killed." - Stannis Baratheon[Game of Thrones]

Shahid Kapoor does an excellent job of looking like royalty. However, apart from his outstanding dialogue delivery, there's precious little material given to him to expand on. It's a pity therefore that when you have chiseled out a villain this good, you only get a cardboard template to draw your hero on. In the case of Padmaavat, the only thing that defines our hero is honor. It's a sheer waste of talent when you watch the Haider actor saddled into a role where he has to look lovingly into the eyes of the titular character, or spouting nearly every line about honor for the most part of his screen presence. You can't help but feel a slight tinge of anger at the director for not giving his role enough meat. Still, he makes the most of his role and there are moments of brilliance where he gets to shine, particularly in the scenes he gets to share with Ranveer Singh. As an audience, you can literally feel the energy the two actors mutually feed of each other, like a clash of two different forces, one manic, while the other, cool and calculating. 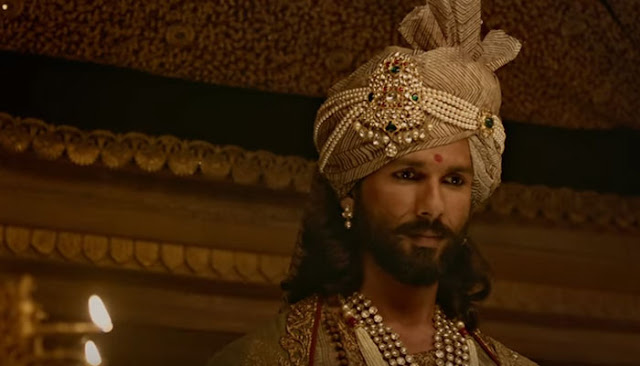 The biggest disappointment however is in Deepika Padukone's one-note performance. My biggest fear was that in the midst of showing the two men battling it out like a pair of savage lions, the film may get tempted to ignore it's titular character. However, despite Deepika taking the driver's seat post intermission, her performance appears monotonous, and after a point, it's really hard to keep yourself invested in her arc. By the time she has her crowning moment of fiery glory as she conducts her final walk towards the fire(we all know how this ends), you are more interested in watching Ranveer screaming his lungs out as he runs around a palace he had laid siege on.

My biggest problem with the treatment of the subject was not how much importance the antagonist of the movie was given, nor was it his extended screen time. Personally, I would not have minded seeing more of Khilji and less of the Deepika-Shahid lovebirds. My only grouch is just how underdeveloped these characters were. By contrast, both Aditi Rao Hydari(as Khilji's wife) and Jim Sarbh felt far more real and relatable. And clearly, you know something is wrong when you root more for Ranveer-Jim Sarbh or Ranveer-Aditi as a couple, despite their limited screen time. Aditi Rao Hydari brings about a doomed like presence in the film, and her short performance may even remind you of Priyanka Chopra's in Bajirao Mastani(2015). Jim Sarbh's unusual chemistry with Ranveer is to watch out for.

Technically, the film is a visual marvel, but that is something that you come to expect from in a SLB film, so no surprises there. Padmaavat was an absolute treat to watch in IMAX, given the sheer scale and ambition of this film. The battle scenes are expertly staged, and are even comparable to Baahubali. The music by Sanjay Leela Bhansali gives the film it's heart, which it's lead role sadly lacks, although the soulful Ek Dil Ek Jaan could have been removed from the film.

Personally, I love the melodramatic excesses in a SLB film only because of their ballad like narratives, and ballads are supposed to be loud. But I really wished the film's other two leads could have risen to the same operatic level as Ranveer Singh. This one is an enjoyable one-time watch only for Ranveer Singh!

* This is perhaps the third Shahid Kapoor film(Haider, Rangoon & Padmaavat) where the climax shows Shahid Kapoor running before getting killed or seeing someone get killed. The poor man seems destined to have tragic endings. Let's hope he doesn't get typecasted and get some happy endings too.

* If Game of Thrones ever gets remade in Bollywood, cast Shahid Kapoor as Ned Stark, what with his whole obsession with honor.

* Okay, the sword fight between Ranveer and Shahid is obviously lifted off from the Brad Pitt-Eric Bana one in Troy(2004).

* The climactic shot of Alauddin Khilji running towards Padmavati right before she immolates herself, but not making it in time before the doors close on him has been repeated in Sanjay Leela Bhansali's very own Devdas(2002).

* Lastly, I have not mentioned anything about some so called 'Kayar' Sena. Well, I just believe not to give any such fringe groups any importance.