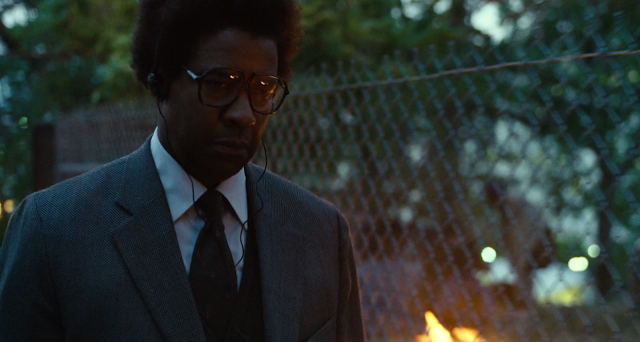 A Terrific Denzel Washington in A Watchable Film...

Just last week, while reviewing Bollywood director Sanjay Leela Bhansali's controversial magnum opus Padmaavat(2018), I mentioned how I loved the way the operatic performance by one of its leads, lifted the otherwise lacklustre film to an altogether whole new level. It's worth discussing how one special performance can make up for a picture's overall lack of quality. You're watching a film, which you know is nothing great, but every time an actor who's really committed to the material comes up on screen, you instantly perk up! That one special performance is the difference between you leaving the movie screening thinking how you can never get those two hours of your life back, or maybe that wasn't so bad after all.

Actors are like chameleons. Their body is their tool. They are expected to change their appearance and mindset in order to get into the skin of the characters they are portraying. Which is why I often wonder why do audiences go to watch a film only because a particular actor is there in it. Shouldn't it be the director because of whom audiences should flock to a movie screening? Let's face it, try as much as they want to, but a director cannot really change his/her style with each new film. There will always be some key trademark visible in all his/her films. Therefore, going by this logic, whatever expectations the audience should have, it should be from the director, and not the actor, since actors are meant to surprise us.


Maybe on some level, I decided to watch Roman J. Israel, Esq. primarily because its lead Denzel Washington has been nominated for the Best Actor at the 90th Academy Awards. However, I was equally ecstatic to know that this was director Dan Gilroy's first film after his tremendous debut with his restlessly thought provoking classic Nightcrawler(2014). If Nightcrawler was Gilroy's creepy take on shameless tabloid journalism, then Roman J. Israel, Esq. serves as an intriguing outlook on the inadequacies of the US legal system. While the protagonists of both these films are loners living on the fringes, who have to navigate their way in the world, it is in their moral stance that the two are as as different as chalk and cheese.

And it is exactly in the characterization where the film suffers. While Jake Gyllenhaal's character from Nightcrawler, which seemed to be designed along the lines of Robert De Niro's Travis Bickle from Taxi Driver(1976), packed in enough intrigue as a person who presented himself as a likeable but evil guy, Denzel Washington's idealistic character could have worked if the director had not opted for going with the done to death template of a man with principles finally compromising on his ideals to make a quick buck after years of living frugally, only to return back to his ideals because his conscience just could not permit him to succumb to the apple pie capitalism surrounding him.

Still, as mushy and unrealistic as his decisions are, Denzel Washington plays Roman Israel with such gawky sincerity that you believe in them. Just watch the scene where an out of work Denzel holds back tears during a job interview, and you'll realize why his performance has earned him an Oscar nomination. Colin Farell is decent as Roman's nemesis Guy Pierce, the kind of high profile executive guy who represents the hidden face of American capitalism. 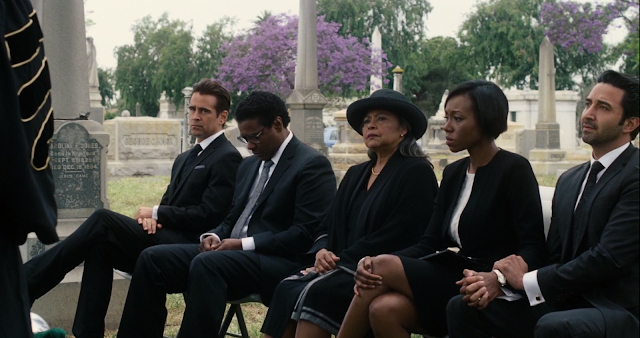 Having watched the film, I was not sure what Roman J. Israel, Esq. was trying to be. Was it a commentary on how large scale law firms exploit the poor and dispossessed, was it supposed to be a debate on idealism vs hypocrisy, was it a bleak character study of a struggling idealist, or was it supposed to be a thriller set in the underbelly of the Los Angeles criminal court system? The premise is promising, but frankly, the story somehow never quite fits as a whole. Throw in a bit more of that Nightcrawler cynicism, and the movie could have made for a much more entertaining thriller.

In spite of all its shortcomings, it's Denzel Washington's lawyer act that makes for a strong case to try giving this legal drama a one-time watch. I'm going with 3/5.