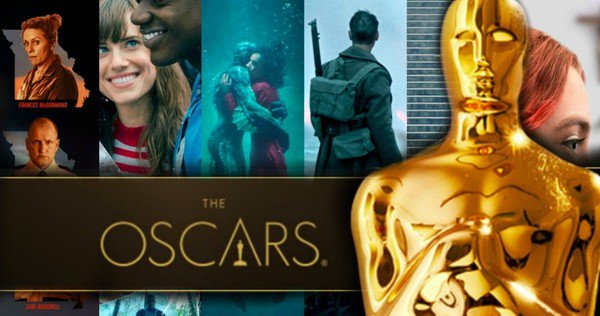 Movies make us laugh, cry and reflect. Sometimes, cinema's senior prom night - the Oscars take a cue from the movies it celebrates and surprises us almost as much as the ending of Get Out or The Shape of Water. From Kevin Kostner's directorial win(Dances with Wolves) over the likes of Martin Scorsese(Goodfellas), to last year's infamous La La Land-gate, one of the best parts of Oscar time is trying to guess who's going home with those coveted, shiny statuettes and all attendant bragging rights.

Which film deserves to win? Which film stands the most chance of winning? There's always a royal conundrum. Which is why I have prepared a list of films which in my opinion are the most deserving, as well as the ones that that have a higher probability of winning. One thing is for certain, there are going to be some pleasant surprises and there are going to be some major disappointments.

Let's just say that it's about time that a project backed by Andy Serkis who has more than pushed the boundaries for motion capture and CGI, gets its due.

Just how did they transform the lean and lanky Gary Oldman into the fat, balding profile of Winston Churchill? There can be only one clear winner here.

Carter Burwell's ability to provide each character a distinctive musical signature makes him rise above heavyweights such as Hans Zimmer.

I was mighty impressed by the manner in which Dennis Gassner and Alessandra Querzola constructed massive set pieces in Blade Runner 2049 as a means to juxtapose the pitiless vastness of the dystopian future against its mass of cold and impersonal characters. Having said that, Nathan Crowler and Gary Fettis using actual Spitfire aircrafts and the exact same boats that took part in the real Dunkirk evacuation, gives Dunkirk a level of realism, and a very slight edge over Blade Runner 2049.

Just how did the trio of Mark Weingarten, Gregg Landaker and Gary A. Rizzo get Hans Zimmer's bombastic sound mixing synthesized to the sound of a ticking clock(incidentally from director Christopher Nolan's own watch), in order to present the audience with the auditory illusion of urgency during war?

In Baby Driver, a film where the sound is a character in its own right, Julian Slater's visceral sonic palette takes it to the next level, as sound and music are intricately entangled with visuals of bullets flying and tires screeching in a unique cinematic dance.

Juggling between narratives and keeping the viewers perplexed with his subjective idea of the time puzzle, only to reveal the big mystery in the third act, has been a common tool Christopher Nolan has used effectively in many of his films. Film editor Lee Smith ensures that Dunkirk will be remembered for being a hypnotic synthesis of land, air and water, all told in a non-linear narrative. The icing on the cake is that he packs it all in in 106 minutes.

Downright funny, occasionally violent and surprisingly very moving, Martin McDonagh's screenplay has the ability to shift the film's confrontational tone to that of tenderness and humanity with the utmost ease. A clear winner here!

An Oscar win is just about the only industry accomplishment that eludes the top-tier comic-book studio Marvel. An unlikely choice which I feel deserves the win more than current favorite Call Me By Your Name.

An animated movie that offers children a way to process death, Disney's Coco infuses life into the macabre. Having said that, Loving Vincent may very well land up with the Golden Lady simply for being a landmark event in the history of animated films, that organically marries the traditional forms of art with the more modern cinematic medium of storytelling.

That Dunkirk has given its director Christopher Nolan its first ever Oscar nomination is indeed baffling. The fact that Christopher Nolan has a technical mastery over his craft that possibly no other director of this generation has, is no secret. If you ever want to understand what it is like to be in the midst of a battle, wondering whether or not the next bomb dropped from the next Luftwaffe that passes by will blow you to smithereens or not, all without causing you any actual injury, then Nolan manages to achieve the impossible.

However, director Guillermo dell Toro's ability to flip the typical monster movie on its head and still manage to conjure cinematic magic out of a predictable movie might just deny Christopher Nolan from his first Oscar win. A tough choice, but I think Guillermo has a slight edge here.

It has to be either Woody Harrelson or Sam Rockwell, both of whom have wonderfully complemented each other in Three Billboards Outside Ebbing, Missouri. Last year, Mahershala Ali won the Oscar in the same category for his work in Moonlight. Woody's role feels pretty similar in the sense that they both have a bittersweet but limited presence. Sam Rockwell has the slighter edge here for making us believe that even a truly evil guy is capable of being nice and doing some good, even if it's for a moment.

There is absolutely no competition here. It has to be Frances McDormand, it just has to be her.

For the longest time, I debated with myself who deserves it more - Daniel Day-Lewis or Gary Oldman? Gary is by far the popular choice for his eye-popping transformation as Winston Churchill. If Oscar history is anything to go by, then Gary will most certainly wrap his hands around the Golden Lady for the first time. I just hope and pray that the Academy voters look beyond Gary's more noticeable performance and appreciate the nuances with which he has intricately weaved into his role like a true craftsman, fully in control of his craft as an actor.

Call Me By Your Name
Darkest Hour
Dunkirk
Get Out
Lady Bird
Phantom Thread
The Post
The Shape of Water
Three Billboards Outside Ebbing, Missouri

My brain always told me it would be Three Billboards Outside Ebbing, Missouri that would etch its name in cinematic history. However, the moment Daniel Day-Lewis uttered those lines with the intensity that only a doomed lover could speak, my heart at once wished that it should be Phantom Thread that should be bestowed that precious honor.

Mark my words, whether or not Phantom Thread indeed wins the Oscar for the Best Picture, those lines will be forever weaved into cinematic history, right alongside the likes of - "Frankly, my dear, I don't give a damn"(Gone With The Wind).