Cast : Ishaan Khatter, Malavika Mohanan, Gautam Ghose, G.V. Sharada, Tannishtha Chatterjee
Director : Majid Majidi
Genre : Drama
Synopsis : When on the run from the cops, Amir finds his estranged sister Tara, who in a bid to protect her brother lands up in jail. Their entire lives have been clouded by despair as unexpectedly the light shines on them from Beyond The Clouds.

"Last, but not the least - in fact, this is the most important - you need a happy ending. However, if you can create tragic situations and jerk a few tears before the happy ending, it will work much better." - Satyajit Ray

It's no secret that Iranian filmmaker Majid Majidi's works are clearly inspired by those of the legendary Satyajit Ray. Just like the poverty stricken hero from Pather Panchali(1955), Majidi's stories center around people who struggle on a daily basis, who even in the face of adversity, retain their dignity and empathy for others less fortunate. The stories that his films portray are the kind that can be found in every street and corner of a soul-crushing and nihilistic city like Bombay.

From the sprawling Dhobi Ghat to the swampy mangroves, the life-saving Mumbai locals, the cagey brothels, and the cacophony of the Ferry Wharfs, Majidi captures the unforgiving city of Bombay like no other, and shows how the city, an incubator of evil, can turn even a righteous man into a monster. More than anything else, he shows how each character in the film, whether major or minor, is the creation of street-level forces. Now while this may sound all too similar to the premise of Slumdog Millionaire(2008), where Danny Boyle's story told the unbelievable rags to riches story of an underdog, Majidi's film is more grounded in the power of basic human emotions, and feels far more relatable.

It's ironic that a film that tells the story of characters who lack the privilege of being born with a silver spoon in their mouth stars Ishaan Khatter, who has the privilege of having an elder brother who has cemented his place in Bollywood. However, unlike many debutantes, Ishaan never for once appears self conscious, and shows that if you want to make a grand entry into Bollywood, you don't need to have rippled abs, perform impossible stunts, mouth balderdash dialogues or dance like Michael Jackson. All you need to do is to submit yourself to the director's vision.

Scenes that show his character Amir interacting tenderly with a bunch of kids show his remarkable restraint and maturity in front of the camera. Then there's the scene where his angry outburst and subsequent meltdown even reminds you of elder brother Shahid's palpable energy in the 'hum hai ki hum nahi' scene from Haider(2014). The fact that the young actor has chosen this to be his debut vehicle over the Karan Johar produced Dhadak only showcases what we must come to expect from him in future. 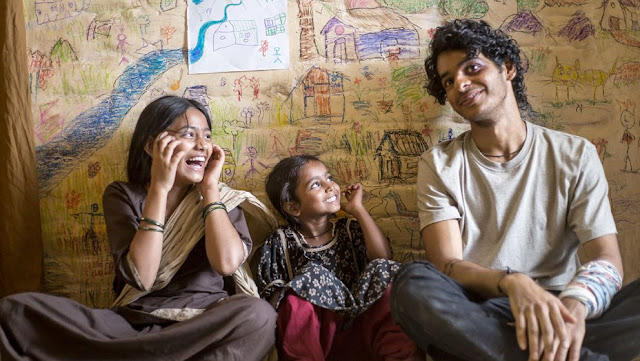 Not just her appearance, but even in terms of dialogue delivery, Malayalam film actress Malavika Mohanan feels like a carbon copy of a young Deepika Padukone. As Amir's sister Tara, she holds her own despite Ishaan's raw and energetic presence. Veteran Malayalam and Telegu film actress Sharada is excellent in her role, and adds gravitas and sadness to the whole film with her impoverished act. A special mention must also be given to all the child actors, who are the real life and soul of the film, and possibly the only characters with pure hearts in this story.

The real beauty of the film however is how Majidi manages to conjure emotions from even the most minor of characters. In Majidi's world, he even makes us care for a molester, who is shown to be capable of having some inherent goodness left in him even after what he has done. Some of the most heartfelt moments of the film are when Amir is made to take care of an old lady and her two granddaughters, despite their language barriers and Amir's natural disdain for her son. It is in such moments when Majidi's film springs alive with joy and sorrow in equal measure. One moment, you will be smiling full of joy and the next, you'd be left misty eyed.

Beyond The Clouds is a culmination of the best talents working in the Hindi film industry. Whether it is cinematographer Anil Mehta's evocative use of blankets, silhouettes and crayons to amplify horror, empathy & pure joy, A.R. Rehman's beautiful thematic compositions, Vishal Bhardwaj, who has penned the Hindi dialogues, every actor, and at the helm of it all, Majidi himself, who crafts a simple story under which, lies a gamut of emotions.

I can't recall the last time I've felt happy, sad, angry, horrified and tense, all while watching a single film. Beyond The Clouds is a film that made me go through a whole range of emotions. It's a film that could have been made anywhere and in any language, and yet transcend all barriers, language or geographical. It's nowhere close to Majidi's best works, and is certainly no stellar work of art. However, its heartfelt message of hope is a testament that while cinema can't save lives, it sure as hell can make you feel that life is worth living.