The Greatest Trick The Devil Ever Pulled!

There are several moments in the first half of Abhinay Deo's Blackmail that for some odd reason reminded me of Charlie Chaplin's Modern Times(1936). The iconic film was at its heart Mr. Chaplin's critique on the fully fledged 'talkies' that had completely replaced the era of silent films. It was his critique on the efficiencies of modern industrialization.

Forget the past few centuries, but in the mere decades since Charlie Chaplin's final appearance as the beloved Tramp, mankind has taken giant leaps aided by technology. However, with this giant leap of progression, our struggle to eschew alienation and preserve humanity in a modern, mechanized world has turned us all into helpless cogs in a world beyond our control. Our relationship with technology is not too different from the symbiotic relationship shared between the host and the parasite. The parasite spends a large part of its life attached to the host, until it is fully grown and ultimately causes the host's death. Likewise, the Internet has grown and proven to be a parasitic mistress that has subtly driven us to divorce humanity.


In our pursuit to embrace the the technologically-driven future, we have let go off our ability to empathize. We have no sense of what morals are anymore. Perhaps it is this very notion of what humanity has evolved into, that has populated a film like Blackmail with such immoral characters. Director Abhinay Deo creates a dog-eat-dog world where compassion and empathy simply do not exist. His characters never for once think of the moral consequences of their actions. It's every man for himself and the Devil takes the hindmost.

Blackmail stars Irrfan Khan in the lead, who plays Dev, a man trapped in a loveless marriage, and sits up late in his office playing Pacman, only to return home to his sleeping wife and a cold dinner awaiting him. Making mental calculations in his head of how he is going to save up on his EMI for the month is what constitutes his daily life. In some ways, you can even consider Dev to be a much more older and defeated version of Ranbir Kapoor's Ved character from Tamasha(2015). The first time we actually see him exchanging words with his wife is almost halfway through the film. Their non-existent love-life even reminded me of the bitter couple from the Russian drama Loveless(2017). Much in the manner in which social media has alienated people from society, his isolation from any genuine human interaction is perhaps the reason why the unassuming poor chap is so heartless.

It's no surprise that the film rests on Irrfan's superbly underplayed performance. It is his understanding of his flawed character that makes you still root for him, despite the film's numerous shortcomings.

While the first half of the film is packed with enough quirky humor to keep the audience engaged in the continuous cycle of blackmailing, the second half contains moments of pure shock and sudden violence that are clearly intended to jolt the audience out of their reverie. Now all this if fine, but by the time the drama actually starts picking up, the film starts lagging in its pace. Add to this, an entirely needless subplot about Irrfan Khan's boss, played by an over the top and hammy Omi Vaidya, who is obsessed with Trump and intends to replace toilet water jets with the American culture of toilet paper, as a means to economize on water.

On so many levels, the film relies on its own absurdities, much in the same manner that Abhinay Deo's debut Delhi Belly(2011) did. While the film retains the kind of dark, hedonistic humor that the former film had, it's a tad too self-indulgent, and one misses the tight grip that the director had on the storyline of Delhi Belly. Luckily, all these shortcomings are masked by Abhinay Deo's innovative direction and a clever screenplay that's filled with enough chutzpah to forget all these minor shortcomings.

Amongst the supporting cast, Arunoday Singh is enjoyable to watch as the not so bright lover, who is the closest thing that this movie comes to have a villain. Watching the cat and mouse sequences unfold between his and Irrfan's characters brought back fond memories of Sudhir Mishra's wonderfully twisted Yeh Saali Zindagi(2011), also starring the two actors. As usual, Divya Dutta is another delight to watch and her role as Arunoday's alcoholic wife, while short, is impactful. Kirti Kulhari however has limited screen time and doesn't have much to do except looking distressed. 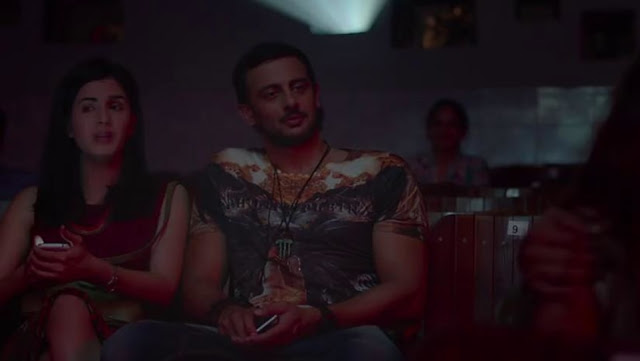 "The greatest trick the Devil ever pulled was convincing the world he didn't exist. And like that... he's gone" - Kevin Spacey[The Usual Suspects(1995)]

Blackmail surprises you with its climax. It takes time to unfold, but it's a delicious little treat if you muster the patience for it. Unlike the crude humor of the many Golmaals and Anees Bazmi comedies where you are expected to leave your brains behind, this is the kind of brain and brawn comedy that the multiplex-audience would enjoy. Its chaotic, wickedly funny and thoroughly entertaining!